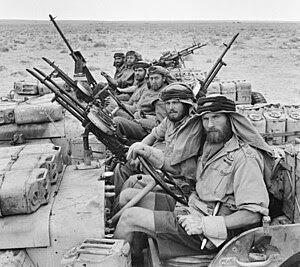 Opportunistic thugs attempting to steal a van got more than they bargained for when they prised open the doors and were faced with a team of heavily-armed SAS officers.

The four soldiers were taking part in late night military training on a council estate in Manchester when the bungling teenagers tried their luck.

The boys threw open the doors to find the men in full SAS gear with machine guns, pistols and live ammunition.

I am reminded of the time some illegals were walking up the California coast when a group of Marines doing an amphibious assault came ashore in time to surround them.

BTW, for those not familiar with the SAS, they are British special ops troops. The photo is of a SAS unit in World War II.