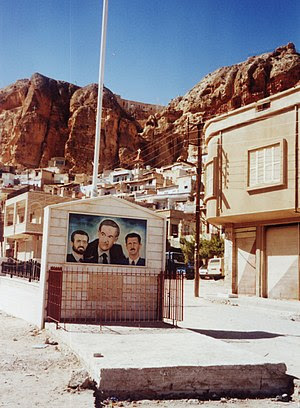 In more proof, if any were needed, that liberals are the reactionaries of our time, it was only weeks ago that Hillary Clinton was calling Bashar al-Assad a “reformer” and Vogue magazine was proclaiming his wife a “rose in the desert.”

As we know, and the horrific videos from Syria on PJM show conclusively (they look like living versions of Goya’s The Third of May ), the ophthalmologist is as much a reformer as Josef Mengele and Asma as much a rose as Eva Braun.

Since his father Hafez brutally imposed his will over Syria in the Hama massacre, the Assads have been a family of secular fascist torturers and murderers in league with religious fascist torturers and murders in Lebanon (Hezbollah), Gaza (Hamas), and Iran (the mullahs), not to mention North Korea (also secular). They assassinate democratically elected foreign leaders (Hariri), encourage and facilitate global terrorism, and shoot as many of their own people as necessary to maintain power while exploiting the best of their country’s resources for personal gain. In other words, pure evil.

Nothing new there — yet, for some reason, our liberal leadership and their media allies were never able to acknowledge fully something so obvious. Always — as Obama did with Ahmadinejad while the Iranian democracy demonstrators were being shot in their streets and tortured in prison cells — they sought to reason with despotism. Or, more likely, pretended to do so because it was all game for the aggrandizement of the self, for image. The policy itself never made sense.

At its heart it is a refusal to see evil for what it is. "Realism" when it comes to evil regimes exacts a high price eventually for the people in those regimes and for the US too. Can we quit pretending now that we can "flip" Syria and take her out of Iran's orbit? She is there because of shared interest in evil.

Both regimes are busy these days trying to restore fear in the minds of the people. Their calculation is that if they kill enough noncombatants, the rest will eventually go home and give back control of the streets to them.