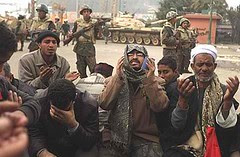 “The Palestinian Authority has to choose between peace with Israel and peace with Hamas,” Mr. Netanyahu said in a televised address on Wednesday. “Peace with both of them is impossible because Hamas aspires to destroy the state of Israel and says so openly.”

The agreement appeared to catch the Obama administration, like many others, by surprise. In a sharply worded statement, Tommy Vietor, the spokesman for the National Security Council, said that the administration was seeking more information but that it considered Hamas a terrorist organization that would not be a reliable partner in peace talks with Israel.

The news comes as the so-called Arab Spring has shaken the Middle East, leading to the demise of two longtime autocrats and raising new fears in Israel about its alliances and security. Especially alarming to Israel was the ouster of President Hosni Mubarak of Egypt, which has a peace agreement with Israel.

It is possible the Egyptian Brotherhood brokered the deal in order to destroy the chances of an agreement with Israel. In a rational world such an agreement would take the pressure off Israel to strike a deal with the Palestinians. If the deal takes place look for Israel to annex all of Jerusalem and portions of the West Bank.