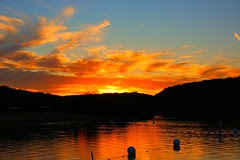 When wildfires threatened the upscale community at Possum Kingdom Lake just west of here a week ago, the residents were desperate for, among other things, better cellphone service.

Jackie Fewell, a local real estate agent who had been evacuated to a hotel here from her home in Possum Kingdom Lake, posted complaints about AT&T on a blog that she had started on her company’s Web site.

At the same time, Amy Sabbatini, who owns a weekend home at Possum Kingdom Lake, called a friend whose business is a major AT&T customer. That friend called executives at the phone company.

Other readers wrote to the blog, saying they also had high-level contacts at AT&T and would see if they could help. One reader said he worked there and would get on the case “A.S.A.P.”

Within hours, an AT&T truck with a mobile cell tower had pulled up to the Mineral Wells hotel where Ms. Fewell was staying. The phone company workers waved, and the tower has been providing five strong bars ever since.

“We all are feeling really empowered,” Ms. Fewell said in an interview at the blog’s command center here, about 25 miles east of Possum Kingdom Lake and 50 miles west of Fort Worth.

The blog is another example of citizens harnessing social media to cope with a disaster, but this one has an advantage: it is written by and for a moneyed and well-connected clientele. These are people who are used to making things happen, not being passive victims. Their power, combined with that of the Internet, has produced a blog with clout.

Texans don't like to be victims, that is for sure. These ladies wound up providing a service that those fighting the fire came to rely on too.