International Criminal Court to look at Assad and his Syrian cronies 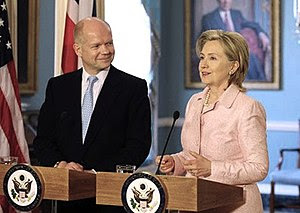 An influential body of international judges and lawyers called for Mr Assad and his lieutenants to be held to account for Easter weekend attacks in which troops and militamen fire on civilians.

"Those ordering and carrying out these attacks, including those firing live rounds into crowds, must be held criminally accountable," the International Committee of Jurists (ICJ) said in a statement.

As opposition supporters continued to bury dead comrades on Sunday, four more were reported to have been killed.

William Hague, the Foreign Secretary, warned all Britons in Syria that the scale of violence was so grave they should leave immediately or risk not being able to leave "at all" as the turmoil worsened.

Western governments were coming under growing scrutiny for their divergent policies towards Libya and Syria, where more than 300 people have been shot dead since unrest began five weeks ago.

The chances of lawfare working to stop a despot like Assad are remote. Assad is a little smarter than Qaddafi in that he has not used air power and he has not openly made threats to wipe out cities. He has followed the Iranian approach trying to reinstate a fear of the government through random killings.

So far this has not worked and it has given the demonstrators another opportunity to take to the streets and denounce the Syrian government. The killings are deliberate so there is a case to be made for murder charges, but it is clear they will not be made by the current government in Syria.