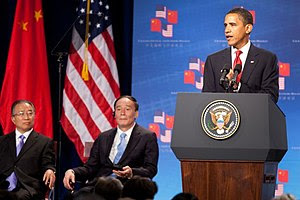 To be precise, leading from behind is a style, not a doctrine. Doctrines involve ideas, but since there are no discernible ones that make sense of Obama foreign policy — Lizza's painstaking two-year chronicle shows it to be as ad hoc, erratic and confused as it appears — this will have to do.

And it surely is an accurate description, from President Obama's shocking passivity during Iran's 2009 Green Revolution to his dithering on Libya, acting at the very last moment, then handing off to a bickering coalition, yielding the current bloody stalemate.

It's been a foreign policy of hesitation, delay and indecision, marked by plaintive appeals to the (fictional) "international community" to do what only America can.

But underlying that style, assures this Obama adviser, there really are ideas. Indeed, "two unspoken beliefs," explains Lizza. "That the relative power of the U.S. is declining, as rivals like China rise, and that the U.S. is reviled in many parts of the world."

Amazing. This is why Obama is deliberately diminishing American presence, standing and leadership in the world?

I don't think this is the kind of "leadership" Americans want or expect from their President. This regressive style goes hand in hand with his hat in hand apologetic style of representing America. I think we will hear a lot about leading from behind in the 2012 race.