Syria shoots those who refuse to shoot 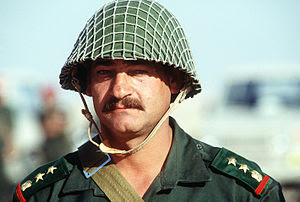 Syrian army units opened fire on each other yesterday in clashes over the crackdown on demonstrators.

Soldiers who refused to fire on demonstrators were executed on the spot, according to reports on Al Jazeera.

Four soldiers were shot dead and two captured at a military post in Deraa, where the pro-democracy uprising started six weeks ago.

Syrian state TV blamed the attack on ‘armed terrorists’. The regime has consistently blamed the unrest on armed gangs.

But despite the unrest within army ranks, security forces fired on tens of thousands of protesters who had defied the regime to take to the streets yesterday.

The Syrian military must feel the situation is pretty desperate if they are engaging in summary executions for those who refuse to kill non combatants. It seems to be a situation where war crimes are piled on top of each other in the hops of saving Assad's ass of a government.