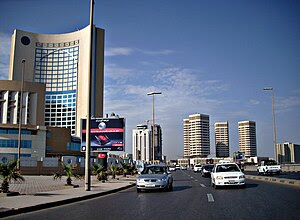 NATO war planes struck Col. Muammar el-Qaddafi’s compound here early Monday and bombed a state television facility in an evident escalation of the air campaign to aid the rebellion against his four decades in power.

The attack on the compound was the third since air raids began in mid-March, but the strike at the television facility was the most dramatic broadening yet of the NATO air campaign, suggesting that nonmilitary targets would be hit in an effort to break down the instruments of Colonel Qaddafi’s broader control.

A senior Libyan government official said Monday that the strike knocked state television off the air for about half an hour.

In the port of Misurata, 130 miles east of the capital, rebels reported that a widely publicized government pullback had given way to renewed shelling by government forces outside the city. The initial withdrawal by pro-Qaddafi forces over the weekend after a nearly two-month siege had bewildered some rebels.

In Tripoli, at least two large bomb blasts thundered over the capital just after midnight, and journalists escorted to the compound by government officials saw firefighters hosing down the smoldering remains of an office complex where Colonel Qaddafi works and meets visitors. The explosions sent cement and debris flying more than 50 yards. There were no signs of armaments and Libyan officials said no one was killed, although they said as many as 45 people were slightly injured by the blast.

Qaddafi and his supporters appear to be unmoved by the bombing which is a greater danger to janitors working the night shift than to Qaddafi. If NATO gets serious they might consider launching the bombs when Qaddafi is likely to be around.