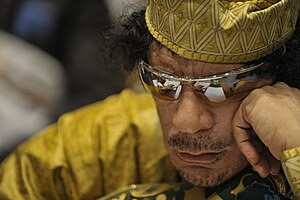 Muammar Gaddafi's opponents unfurl a rebel flag from a motorway overpass in the dark and speed away. On the outskirts of the capital, masked protesters denounce the Libyan leader, then quickly disband. The pop of gunfire is heard almost every evening, some of it, according to dissidents, from sneak attacks on army checkpoints.

Furtive resistance is the best those seeking Gaddafi's removal can muster, under the heavy weight of fear in the most important stronghold of his rule. But the fact that such small-scale actions are taking place at all is a sign that activists are still trying to bring the rebellion to the capital, even after Gaddafi's forces gunned down demonstrators two months ago. If confirmed, the reports of sporadic shooting at security posts could mark a significant shift away from peaceful protest, signalling the desperation of regime opponents in Tripoli.

At the same time, major disruptions in daily life – a result of international sanctions and the exodus of hundreds of thousands of foreign workers – will likely erode support for the regime. The price of cigarettes has doubled. Drivers wait hours to fill up petrol tanks, with queues of cars snaking around city blocks. Large crowds form outside bakeries that can no longer keep up with demand.

Tripoli is the wild card in the deadlock that has gripped Libya's two-month-old rebellion. Rebels control roughly the eastern half of the country, Gaddafi's regime most of the west. International air strikes have prevented Gaddafi's forces from taking back rebel territory, but the opposition has been unable to advance on the west to oust the Libyan leader. An uprising in the capital with a million people could dramatically change that equation, which is why the government has clamped down so hard. The internet has been disrupted, and dissidents say people avoid speaking openly, even to friends. There's also little contact with the rebel movement in the east, a rebel spokesman said.

Some believe the wall of fear protecting Gaddafi may soon be coming down.

There is more. Qaddafi still has enough control from his bunker to keep the expressions of the rebels from openly being expressed, but he has lost control of their feelings and their desire for freedom. While there is still some fear, it is more prudence in the face of a despot at this point. He is losing the ability to impose that fear persistently.