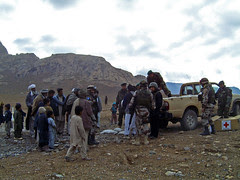 The Saudi citizen died in an air strike almost two weeks ago in Kunar province, near Pakistan, Nato-led forces said.

The alliance says it has killed more than 25 al-Qaeda leaders and fighters in the past month. There is no independent confirmation of the claim.

A spokesman for the Nato-led International Security Assistance Force (Isaf) would not say who was number one on the most wanted list, citing the possibility of hampering the search.

Ahmed Rashid, an expert on the Taliban, told the BBC that the death of Abdul Ghani was a significant achievement for Nato.

Al-Qaeda now depends more and more on the Pakistan Taliban, Mr Rashid says, because the Afghan Taliban are less welcoming and publicly do not want to be associated with the group.

I suspect their ties are to the Haqqani network in Pakistan. Al Qaeda is now a relatively small force in Afghanistan hiding and training in areas abandoned by the US and NATO such as Kunar province where this guy was likely killed.