Allen West is a conservative star 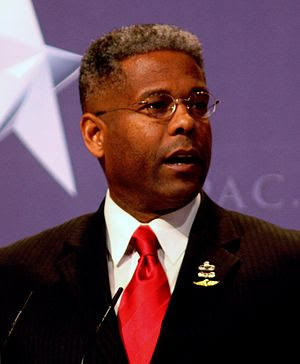 Often, the most interesting thing about a person is the characteristic that lies beneath, that hidden thing that bobs up along the waves of time.


But the most compelling part of Representative Allen B. West of Florida is his own biography, there for all to see: an African-American Tea Party activist Republican congressman and ally of hard-right Israelis who, after his beloved career in the Army ended under a cloud, defeated the sitting Democrat in a largely white, politically polarized district here and quickly became one of the right’s most visible spokesmen.

Mr. West’s fans in his district, which stretches over two counties along the east coast of Florida, are both numerous and loud; hundreds fill his town hall-style meetings, many of them favoring T-shirts bearing his image. At a recent Tea Party rally in Washington, supporters flocked to him like sea gulls to a crust of baguette. Among the 87 House Republican freshmen, he ranks third in the latest fund-raising period for his re-election campaign; his $433,551 haul came largely through individual donations.

Mr. West’s popularity among conservatives goes far beyond South Florida. He was chosen to give the keynote speech in February at the Conservative Political Action Conference, and is frequently featured on the Fox News Channel and in other conservative settings where he enjoys explaining, reiterating or unleashing any number of incendiary remarks concerning what he often calls “the other side.”

There was his recent observation that liberal women “have been neutering American men,” and that the president of the United States is a “low-level socialist agitator.”

Mr. West scoffs at the notion that he has become a sensation. “I don’t drink my own tub water or read my own press,” he said in a brief interview before a town hall-style meeting here this week. “I tell the truth and I stand on convictions and you know what you’re getting.”

West has a sharp mind that makes him good in the Town Hall settings where he loves to take on liberals and others who oppose his views. One of the more fun moments was when he was challenged by a Muslim to find anything in the Koran suggesting Islam was at war with the US. He responded that he was sure there was nothing there because America was not discovered until a 1,000 years after the book was written.

I have seen him in other settings and I like the way he makes his arguments and his stand on the issues. If I lived in his District, I would vote for him.