Inside the Syrian response to the uprising 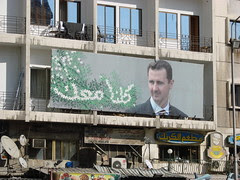 In Damascus, the posters – in their tens of thousands around the streets – read: "Anxious or calm, you must obey the law." But pictures of President Bashar al-Assad and his father Hafez have been taken down, by the security police no less, in case they inflame Syrians.

There are thieves with steel-tipped rubber coshes on the Damascus airport road at night, and in the terminal the cops ask arriving passengers to declare iPods and laptops. In the village of Hala outside Deraa, Muslim inhabitants told their Christian neighbours to join the demonstrations against the regime – or leave.

Out of the darkness of Syria come such tales.

And they are true. Syrians arriving in Lebanon are bringing the most specific details of what is going on inside their country, of Fifth Brigade soldiers fighting the armed units of Maher Assad's Fourth Brigade outside Deraa, of random killings around Damascus by the ever-growing armed bands of Shabiha ("the mafia") from the Alawite mountains, of massive stocking up of food. One woman has just left her mother in the capital with 10 kilos of pasta, 10 kilos of rice, five kilos of sugar, box after box of drinking water.

In Deraa – surrounded, without electricity or water or supplies – the price of bread has risen 500 per cent and men are smuggling food into the city over the fields at night.

But it is the killings which terrify the people. Are they committed by the Shabiha from the port city of Lattakia – created by the Assad family in the 70s to control smuggling and protection rackets – or by the secret police to sow a fear that might break the uprising against Assad? Or by the murderers who thrive amid anarchy and lawlessness? Three men carrying sacks of vegetables outside Damascus at night were confronted by armed men last week. They refused to stop. So they were executed.

Fick has his quirks, but he also has his sources inside Syria and is providing some interesting data on the life of those trying to survive and not get caught in the grips of the secret police and the snipers who are trying to restore fear within the country.