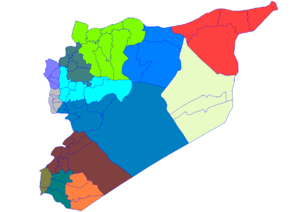 Last weekend, pro-democracy forces declared the southern city of Deraa to be the first "liberated zone" in Syria with plans to set up a "People's Council" to run it. Yesterday, however, the few Deraans still able to talk to the outside world had a different story to tell.

"We are an occupied city now," one Deraan said via his satellite phone, which he could still use by moving close to the sealed border with Jordan.

The picture began to change Sunday as a military column, spearheaded by the 136th Brigade, surrounded the city to prepare for a full-scale invasion. Electricity, water and phone lines were cut off, plunging the city of 250,000 people into darkness and fear.

Deraans, who'd started the national uprising, feared what everyone in Syria knows as "the Lessons of Hama." This refers to a week in 1982 when the Syrian army, led by Basil al-Assad, the late brother of President Bashar al-Assad, crushed a popular uprising in the central city of Hama.

Yet hiding a crime isn't as easy as it was in 1982. This is a different world, with news transmitted instantly across the globe. Most Syrians even today don't know what exactly happened in Hama -- whereas yesterday saw the torrent of images and sound from Deraa, initially reduced to a trickle, resume with vengeance, recording the atrocities committed by Assad's army.

Images of mass killings, reported to have claimed more than 100 lives in Deraa alone, are in cyberspace already.

Yet another sign that Deraa won't be a second Hama: Fewer than 24 hours after the invasion, a crowd of women cast aside the hijab of fear and marched in the heart of Deraa with cries of "Down with tyranny!"

We also have reports of smaller protest marches in the Kurdish city of Qamishli -- and, perhaps more significant, the mainly Alawite town of Jablah. It seems that Assad no longer enjoys the unanimous support even of his own Alawite community.

What we see in Syria is a military coup that dares not use its name. Assad has no political solution to the crisis because he himself is the problem.

Political and military solutions elude the Damascus entity. How many people are they willing to murder this Friday in their attempt to restore fear? But, hey, the regime just got its appointment to the UN Human Rights Council so they can't be that bad, can they?