Syria tries to restore fear by sending in tanks to Daraa 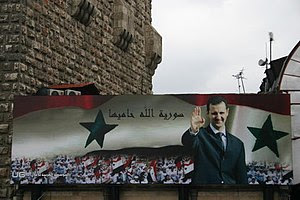 The Syrian Army sent tanks rolling into the restive southern city of Dara’a and carried out arrests in poor towns on the capital’s outskirts Monday in a sharp escalation of a crackdown on Syria’s five-week-old uprising, according to human rights activists and accounts posted on social networking sites. They said at least five people were killed in Dara’a, and bodies were in the streets.

The move into Dara’a seemed to signal a new chapter in a crackdown that has already killed more than 350 people, with the single highest toll on Friday. So far hewing to a mix of promised concessions and blunt force, the government indicated Monday that it had chosen the latter, seeking to crush a wave of dissent in virtually every Syrian province that has shaken the once-uncontested rule of President Bashar al-Assad.

Residents said at least eight tanks entered Dara’a at dawn from four directions, and there were reports of artillery and mortars being used. Phone lines were cut to the area, making first-hand accounts difficult, and nearby border crossings with Jordan were sealed from the Syrian side, Jordanian officials said. But video smuggled out of the town depicted a cloud of black smoke rising on the horizon with volleys of heavy gunfire echoing in the distance.

So far the escalating attempts to restore fear in the people of Syria have failed. The general result has been increased anger among the people with every murder of the non combatants.

As a method of crowd control, tanks do not make much sense. They are a click up from snipers and still lower on the escalation scale than using war planes which might result in calls for a no fly zone.

The UN seems awful silent about the murder of protestors in Syria. It might keep Syria off the Human Rights panel, but that is about it.

The LA Times reports the tanks have actually fired on the demonstrators.  It has several YouTube videos of the crowds looking unintimidated by the tanks.