Marine General given command in Afghanistan 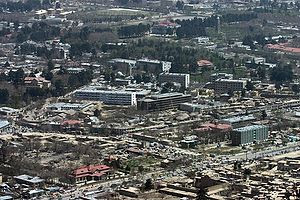 Lt. Gen. John R. Allen was called to the White House on Thursday for the formal announcement that he would take custody of the war in Afghanistan, now the focus of attention as the Obama administration moves toward withdrawing troops and handing over responsibility to the government in Kabul.

General Allen is not well known beyond the Marine Corps and national security circles. But he was President Obama’s first choice to succeed Gen. David H. Petraeus, easily the most recognizable officer in the American military, in no small part for his work enticing Sunni tribal elders in the restive Anbar Province of Iraq to turn their backs on the insurgency and foreign fighters and to join the American cause during 2007 and 2008.

Mr. Obama described General Allen as “the right commander for this vital mission” in Afghanistan. “As a battle-tested combat leader, in Iraq he helped turn the tide in Anbar Province,” the president added.

To be sure, Afghanistan is not Iraq. The regimented tribal structure that allowed the United States to build an indigenous counterinsurgency force by winning over the sheiks in western Iraq cannot be perfectly replicated in Afghanistan, a society whose social structures have been destroyed by decades of war. And the enemy in Afghanistan is far more entrenched and experienced.

But military officers who work with General Allen, 57, say he understands the complex challenges presented by commanding a campaign in Afghanistan that is as much diplomatic and economic as military in a nation with a historic, and understandable, distrust of foreigners.

He has the advanced course work that many generals have these days and understands the political aspects of the new command. While he is the first Overall Marine commander in either Iraq of Afghanistan, he reports to Gen. Matis, another Marine who heads up Centcom. I think he will do alright under the circumstances.