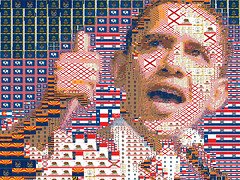 President Obama on Wednesday posted online a copy of his “long-form” birth certificate from the state of Hawaii, hoping to finally end a long-simmering conspiracy theory among some conservatives who asserted that he was not born in the United States and was not a legitimate president.

The birth certificate, which is posted at the White House Web site, shows that Mr. Obama was born in Honolulu, Hawaii, and is signed by state officials and his mother.

The conspiracy theories never made sense to me, and I think this should settle the matter for those who have been curious as to why the President had not released the document. It does not suggest he had something to hide and it was a mistake on his part to wait so long to release it.

Perhaps now we can get back to his real problems as President. His energy policy is a bigger disaster than the oil spill in the Gulf. His rationed health care law is despised by over half the country, yet he is persisting in cramming it down our throats. He seems clueless on the budget issues, looking to waste money on rail project and subsidizing inefficient energy programs.