BP wants another shot at drilling in the Gulf of Mexico 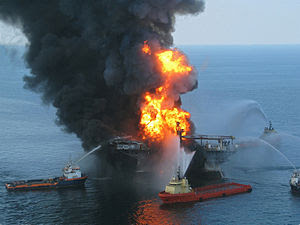 BP has predicted it will be back drilling in the Gulf of Mexico within a matter of months despite continuing legal threats and rows over pollution from last year's Deepwater Horizon disaster. "We expect to be back and actively drilling during the second half of the year," Byron Grote, the company's chief financial officer, told financial analysts from the City of London on Wednesday.

The comments are likely to infuriate environmentalists who believe BP should be kept away from the Gulf, and could upset a US offshore regulator still considering whether to grant permits to BP.

Verbal gaffes by former chief executive Tony Hayward in the wake of the Macondo well accident 12 months ago damaged the company's reputation in America as it attracted widespread criticism from the White House downwards.

Verbal gaffes should not be considered a death sentence. If they were a lot of politicians would be no longer with us. I do think that BP will run into a buzz saw of opposition from Salazar's regulators as well as the EPA, who recently killed a Shell oil deal off the coast of Alaska for because of a ridiculous suggestion that a crew boat would pollute a virtually uninhabited area. In other words they should not expect to be treated fairly.