Lift the drilling bans and watch the price of oil drop 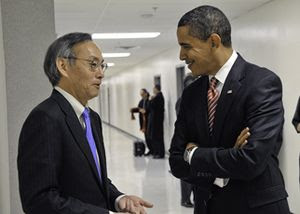 Image via Wikipedia
Will Collier:

It must have looked so simple from Barack Obama’s rarely visited Senate office, or Steven Chu’s comfortable digs at Berkeley: if only we stopped taking advantage of all those nasty fossil fuels, everything would be better. Three years ago, when then-Senator Obama was dismissing high energy prices as just another good reason for more government handouts, and Chu was insisting that Americans ought to pay European prices for gasoline, all they heard in return was applause from their core constituencies — academics and the media.

Unfortunately for now-President Obama, the reality of $4-$5-a-gallon gasoline is a much tougher sell to the general public. He’s put himself to work spinning the line that “speculators” are at fault for high prices, but the actual explaination is far more prosaic. Limited supply plus growing demand equals higher prices. That’s a formula so simple, even a community organizer should be able to understand it.

Asian demand for energy continues to rise as nations in the far east region — oddly lacking in “stimulus” spending — continue to boom. Supply, meanwhile, has fallen off, not only as a consequence of the turmoil in Libya and other oil-producing countries, but also thanks to the Obama-ordered moritorium on drilling in the Gulf of Mexico — and the recenly ordered moritorium on future drilling anywhere else off the American coasline.

Obama and his minions have been chasing the green jobs chimera for so long that it’s an instinct. They pompously suggest that Americans ought to trade in their current vehicles for pricey, government-approved matchbox cars, asserting still that there’s “no quick fix” for high energy prices. History, and very recent history at that, indicates that they are mistaken.

Take a look at this chart compiled by metalprices.com. It’s the price of a barrel of crude oil over the past 5 years.

See that big peak in the middle? That was the last oil spike, in the summer of 2008. Notice how the price hit a high point, then fell off a cliff afterwards?
The day corresponding to that peak, an all-time high of $145.16/barrel, was July 14, 2008. By some strange coincidence, that was the very same day then-President George W. Bush lifted, by executive order, a federal ban on offshore oil drilling.

The fact is they do not want the price to drop.  They are just squirming now to try to avoid the political consequences of their very unpopular energy policy.  Liberals may love high energy prices in theory, but when they are forced to pay them and they see how the rest of the country reacts to them, not so much.