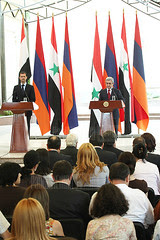 For six turbulent weeks, its minaret has been a landmark of rebellion, emboldening the faitfhful in their demands for democracy. As the besieged Syrian city of Deraa has come under ever more ferocious siege from government troops, the stone tower of the Omari Mosque, peering out over Deraa's ancient Roman quarter, has served as an august focal point for protests.

Yesterday, though, as Syrian security forces drew their stranglehold ever tighter, helicopters backed by tanks dropped troops onto the mosque's grey ramparts, in what seemed to be a symbolic move to stamp their authority on the town. After spraying the Roman quarter with shellfire, and killing a mother and two children in the process, the soldiers converted the Omari's minaret to a different purpose - as yet another snipers' nest from which to terrify the city.

"There are snipers on the roof of the mosque," said one eyewitness, sobbing over the phone as he spoke. "My family and friends are being slaughtered."

This was the scene in Deraa yesterday, where a growing picture of horror is emerging as Syrian governnment forces relentlessly punish the city that hosted the first protests against President Bashar al Assad's dictatorial rule in late March.

Since the arrival on Monday of the feared 4th Brigade, controlled by President Assad's brother, Maher, the reprisals have grown ever fiercer. Deraa's 120,000 residents say their town is now effectively one giant prison, with rooftop snipers shooting anyone who strays into their sights. Troops have also cut off power supplies, blown up water tanks, and raided bakeries, milk depots and food shops, in a systematic bid to starve them out. "We are living in the dark, suffering boredom and fear," one resident told The Sunday Telegraph. "If you go out, you know you will probably die. But if we stay at home, we will probably also die. We are running out of food, of water, of medicine."

It is only slightly more subtle than Assad's fathers massacre in Hama. But there is no out pouring of attacks from the rest of the Arab world as there would be if the US or Israel were doing something so inhuman. The UN stands virtually mute and the Obama administration is imposing sanctions against someone else in Syria. Using a slow genocide seems to be an effective way of avoiding any attempts by the multilateral community to stop them.