Syria did not have enough tanks in Daraa to subdue it? 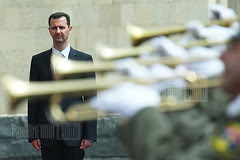 Syria sent more military tanks and troops into the southern city of Deraa on Saturday, a day after a crackdown on protests across the country killed 66 people, despite a condemnation from the United Nations and a U.S. asset freeze on members of President Bashar al-Assad's family.

Tens of thousands of people defied a government ban on protests on Friday and marched across Syria, including the largest demonstrations yet in the major cities of Damascus and Latakia, according to witnesses and activists. An opposition group also on Friday called on the military to lead a transition to democracy, in one of the first attempts by protesters to bridge the widening gap between backers of the regime and those demanding its end.

In Homs, Syria's third-largest city, thousands of people marching out of Friday prayers were dispersed first by security forces firing rubber bullets, and then by heavy rainfall in the afternoon, a resident said. Security forces shot live ammunition into the crowd when the protesters came out in larger numbers after the rain subsided, the resident said. In Damascus and Aleppo, antiregime protesters faced demonstrators loyal to Mr. Assad.

More than 100 additional tanks and 1,000 soldiers moved into Deraa after dawn on Saturday, a resident reached by telephone said. About 28 people were killed and more than 100 injured on Friday when troops shot through thousands of people marching from surrounding villages into Deraa to demand the end of a military siege on the city, the resident said.

"They want to raze it to the ground because this is where the protests started," he said.

So far they have not resorted to the Hama approach, but they are gradually escalating from snipers to troops and tanks and indiscriminate live fire attacks on protesters. With its forces dispersed to try to subdue the people, Syria is vulnerable to challenges by both Israel and Iraq who have been victims of terrorist attacks launched from Syria. Both would have good reason to help the people in the streets of Syria.