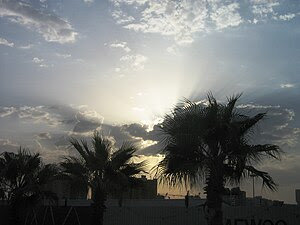 Sayf al-Arab Qadhafi, embattled Libyan leader Muammer Qadhafi’s youngest son, and three of his grandchildren were killed in an air-strike on Saturday, a government spokesman said.

“The house of Mr Sayf al-Arab Muammer Qadhafi … who is the youngest of the leader’s children, was attacked tonight with full power. The leader with his wife was there in the house with other friends and relatives,” Moussa Ibrahim told a news conference in Tripoli early on Sunday morning.

“The attack resulted in the martyrdom of brother Sayf al-Arab Muammer Qadhafi, 29 years old, and three of the leader’s grandchildren,” Ibrahim said.

“This was a direct operation to assassinate the leader of this country.” Ibrahim had earlier taken journalists to the remnants of a house in Tripoli. Given the level of destruction, it is unclear that anyone could have survived, raising the possibility that if Qadhafi was there, he had left beforehand.

Three loud explosions were heard in Tripoli on Saturday evening as jets flew overhead. Volleys of anti-aircraft fire rang out following the first two strikes, which were followed by a third.

Is this why Qaddafi asked for a truce?  Apparently not.  The NY Times reports the truce offer came before the bombing.

Keeping his grand children so close to obvious targets is a reckless act. It is unfortunate they were killed. It is too bad the strike missed Qaddafi. That means the war will continue and more people will die.