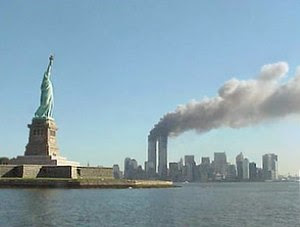 At a hospital, the accused mastermind of the bombing of the USS Cole was recovering from a tonsillectomy. Nearby, the alleged organizer of the 2002 bombing in Bali, Indonesia, was buying lab equipment for a biological weapons program. And in a safe house, the man who would later describe himself as the intellectual author of the Sept. 11 attacks was with other key al-Qaeda members watching the scenes from New York and Washington unfold on television.

Within a day, much of the al-Qaeda leadership was on the way back to Afghanistan, planning for a long war.

A cache of classified military documents obtained by the anti-secrecy organization WikiLeaks presents new details of their whereabouts on Sept. 11, 2001, and their movements afterward. The documents also offer some tantalizing glimpses into the whereabouts and operations of Osama bin Laden and his Egyptian deputy, Ayman al-Zawahiri.

Among other previously unknown meetings, the documents describe a major gathering of some of al-Qaeda’s most senior operatives in early December 2001 in Zormat, a mountainous region of Afghanistan between Kabul and Khost. There, the operatives began to plan new attacks, a process that would consume them, according to the assessments, until they were finally captured.

According to the documents, four days after the Sept. 11 attacks, bin Laden visited a guesthouse in Afghanistan’s Kandahar province. He told the Arab fighters gathered there “to defend Afghanistan against the infidel invaders” and to “fight in the name of Allah.”

It was beginning of a peripatetic three months for bin Laden and Zawahiri. Traveling by car among several locations in Afghanistan, bin Laden handed out assignments to his followers, met with some of the Taliban leadership and delegated control of al-Qaeda to the group’s Shura Council, presumably because he feared being captured or killed as U.S. forces closed in.

At some point, bin Laden and Zawahiri used a secret guesthouse in or relatively near Kabul. The al-Qaeda leader welcomed a stream of visitors and issued a series of orders, including instructions to continue operations against Western targets. He dispersed his fighters from training camps and instructed women and children, including some of his wives, to flee to Pakistan.

In October, bin Laden met in Kabul with two Malaysians, Yazid Zubair and Bashir Lap — both of whom are now at Guantanamo Bay — and lectured them on history and religion. On the day that the U.S.-led coalition began bombing Afghanistan, bin Laden met in Kandahar with Taliban official Mullah Mansour. Bin Laden and Zawahiri also met that month with Taliban leader Jalaluddin Haqqani, who continues to lead a deadly insurgency against the United States and its allies in Afghanistan.

Bin Laden, accompanied by Zawahiri and a handful of close associates in his security detail, escaped to his cave complex in Tora Bora in November. Around Nov. 25, he was seen giving a speech to the leaders and fighters at the complex.

The place was teeming with fighters who were awaiting for al-Qaeda to return their passports so they could flee across the border to Pakistan.

They headed back to Karachi for the most part where many of them were found and arrested by Pakistan forces cooperating with the CIA.

This makes for interesting history about the people responsible for mass murder of Americans. There are apparently few clews in the Wikileaks material about the whereabouts of bin Laden. Much of the material was apparently derived from the interrogation of detainees at Gitmo. It is intelligence we would not have if the Obama strategy was in place.