Maple syrup is good for you?--Scientist say it is a super food 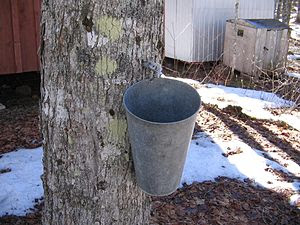 Blueberries, broccoli and fish rich in Omega 3 are among the best known superfoods.
But now something rather sweeter can be added to the list of healthy foods containing high levels of antioxidants that boost the immune system.

Maple syrup is even being described by scientists in America as a ‘one-stop shop’ for beneficial compounds.

Tests on the syrup, which is made by boiling sap from the maple tree, found that it contains compounds which could help manage Type 2 diabetes, as well as acting as anti-cancer and anti-inflammatory agents.

Researchers identified 54 compounds, twice as many as the syrup was previously thought to have. Five were found to be unique to maple syrup.

Several of the syrup’s polyphenol, or water-soluble, compounds inhibited the enzymes that convert carbohydrates to sugars, raising the prospect of a new way of managing Type 2 Diabetes.

They also found that many of the antioxidant compounds, which prevent the oxidation and ageing of the body’s cells, aren’t found in other natural sweeteners.

And I thought I had to give up all the fun foods when I came down with diabetes. I hope this story is true. I may have to check it out, but I am not sure what to put it on since pancakes and waffles are also on the no no list. Walnuts were the super food last week, perhaps I can find a way to combine the two.