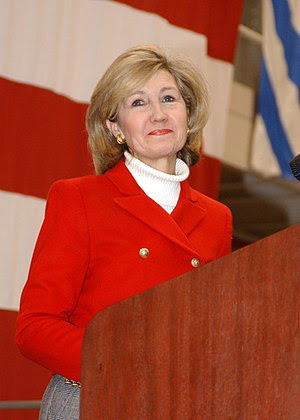 Image via Wikipedia
The Hill:

The four-term senator hasn’t announced whether she’ll run for reelection, but, no matter her decision, Tea Party activists are preparing to run their own candidates.

Because of that, GOP activists and strategists suspect retirement will prove the more attractive option for the senator.

Hutchison lost a contentious primary to Perry in March, and her decision to challenge the sitting governor saw her go from one of the state’s most popular politicians to someone struggling for favor within her own party.

Austin-based Tea Party activist Dean Wright said he anticipates as many as six to eight candidates challenging Hutchison from the right if she attempts to stick it out in 2012.

“She’s burned some bridges,” Wright said. “And she hasn’t embraced the grassroots.”

When asked for comment, Hutchison’s office only said: “The senator has not yet announced her plans.”

Wright said the state’s Tea Party movement sees Hutchison as a relatively easy target. He named Railroad Commissioner Michael Williams as an early favorite of the group. Wright said Williams appeared at more than 150 Tea Party gatherings across Texas and “is saying all the right things” to activists. Williams hasn’t made a formal announcement.

Another Railroad Commissioner, Elizabeth Ames-Jones, is in the race whether or not Hutchison runs for reelection. She has attended several Tea Party events in an effort to drum up support.

I like Michael Williams and Elizabeth Ames-Jones. The are both attractive conservative candidates who understand the need for energy resources. Hutchison has said she did not intend to run again and has explained she wants to spend time with her adopted daughters before they grow up. There are many in Washington who would like to see her stick around. Whether that translates to people in Texas who feel the same way is an open question right now.