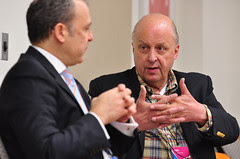 U.S. diplomats concluded in late 2008 that the government of Armenia had supplied Iran with rockets and machine guns later used to kill American troops in Iraq, according to State Department cables disclosed by WikiLeaks.

John D. Negroponte, deputy secretary of state at the time, wrote a December 2008 letter to Armenian President Serzh Sargsyan expressing "deep concerns about Armenia's transfer of arms to Iran which resulted in the death and injury of U.S. soldiers in Iraq."

The cable, based on U.S. intelligence, includes the text of a classified letter labeled "secret" from Mr. Negroponte. It says "in 2007 some of these weapons were recovered from two Shia militant attacks in which a U.S. soldier was killed and six others were injured in Iraq."

The Armenian incident was part of a wider U.S. effort to block Iran's access to the global arms and weapons technology market. For example, a 2010 cable revealed covert U.S. efforts to persuade China's government to block a sale from a Malaysian firm, Electronics Component Ltd., to sell gyroscopes to an Iranian front company.

In some cases though, the cables show the inefficacy of the American effort. North Korea, according to one cable in 2007, successfully shipped missile components to Iran despite U.S. efforts to seek Chinese help in blocking the transfer.

The US threatened to cut off US support for Armenia after the sale was discovered. That probably stopped future sales but did nothing to deal with the ones that resulted in American deaths. While Iran was aware the US was trying to thwart sales of arms to it, it now can guess at the sources and methods used to gather intelligence on these arms sales.