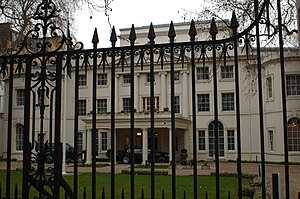 A British network of more than 40 part-time Islamic schools and clubs with 5,000 students has been teaching from a Saudi Arabian government curriculum that contains anti-Semitic and homophobic views, including a textbook that asks children to list the “reprehensible” qualities of Jews, according to an investigation by a BBC television documentary unit to be broadcast on Monday .

A Web site article and accompanying video clip released in advance of the 30-minute Panorama program quoted the textbook as saying that Jews “looked like monkeys and pigs”. The article quoted a separate part of the curriculum — for children as young as six — saying that someone who is not a believer in Islam at death would be condemned to “hellfire”.

A commentary on the video said the textbooks had been obtained by an “undercover” Saudi Arabian researcher from one of the schools and clubs, which meet in the evenings and on the weekend in a network overseen by the cultural bureau of the Saudi Arabian Embassy in London.

On Monday, the embassy did not respond to requests from for comment, but Saudi officials quoted by the BBC disavowed direct responsibility for the schools and clubs and described the teachings cited in the program as having been “taken out of their historical context”.

There is no historical context for calling Jews pigs and monkeys. That only makes Islam look bad. I know the US has been talking with the Saudis about cleaning up their text books, but it appears they have a ways to go.  In the Oklahoma case involving the teaching of Shari'a the CAIR people suggested that it does not include this type of material.  I think the judge needs to take a closer look,