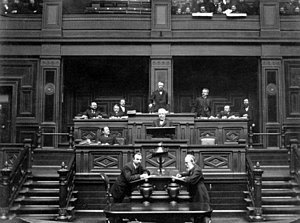 Germany’s recent decision to declare a terrorism alert and dispatch heavily armed police around the nation was set off by phone calls from a man who said he wanted to quit working with terrorists and warned of a pending Mumbai-style attack, according to a law enforcement official with firsthand knowledge of the alert.

The man’s calls to the German Federal Criminal Police earlier this month prompted a quick turnaround by the interior minister, Thomas de Maizière, who had tried to preserve a public appearance of calm even while law enforcement and intelligence forces had stepped up behind-the-scenes efforts to safeguard the nation from the growing threat of radical Islamic terrorists.

“Whoever knows the personality of Minister for the Interior de Maizière knows that he is not a man of quick conclusions,” said Rolf Tophoven, director of the Institute for Terrorism Research and Security Policy in Essen.

But the caller, who claimed to have been a jihadist working with terrorists in the Pakistan-Afghanistan region, phoned the federal police three times providing what law enforcement officials said was concrete information: plans for a team of armed terrorists to rampage through the Reichstag, the popular tourist site that also serves as the home for Germany’s Parliament.

Even more alarming, the man said that there were already two members of the group in or near Berlin, and that four others would soon be trying to join them, according to the official, who spoke on the condition of anonymity because of his work in intelligence and security matters.

It is not clear to me this guy was not trying to test the German response to a threat. Perhaps the concrete information provided went beyond the warning in the story and included the names of the operatives who were threatening terror attacks against the German seat of government.