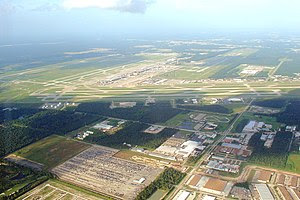 Nearly two-thirds of Americans support the new full-body security-screening machines at the country's airports, as most say they put higher priority on combating terrorism than protecting personal privacy, according to a new Washington Post-ABC News poll.

But half of all those polled say enhanced pat-down searches go too far.

The uproar over the new generation of security technology, and the frisking of those who refuse it, continued Monday with Transportation Security Administration head John S. Pistole saying: "In the short term there will not be any changes in the new procedures."

Pistole said that he will continue to explore whether there are "less invasive" ways to accomplish the same security goals.

I went through the full body scan at Houston Intercontinental Airport on my way to Bangkok and I had the pat-search on the way back at airports that did not have the scan. I did not think either was any big deal and they both took about the same amount of time, although the pat down may have been a little quicker. It seems like a reasonable response to the underpants bomber attempt by al Qaeda in Yemen. I was pretty sensitive about that since my flight home was through Dubai where I actually went through screening getting off the plane from Bangkok and then again before boarding the flight to Houston.

Most of the people in Muslim clothing were older than the profile of the bomber types. What few younger men I saw had their wife and kids with them. I thought Emirates Airline provided quality service in clean planes. The planes used were Boeing 777s.