US sends aircraft carrier to Korea 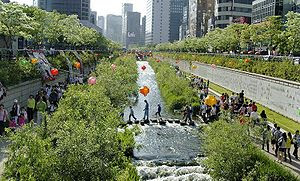 A U.S. aircraft carrier group set off for Korean waters on Wednesday, a day after North Korea rained artillery shells on a South Korean island, in a move likely to enrage Pyongyang and unsettle its ally, China.

South Korea said the bodies of two civilians were found on the island after Tuesday's attack, which is likely to stir up more resentment in the country against its prickly neighbor.

The nuclear-powered USS George Washington, which carries 75 warplanes and has a crew of over 6,000, left a naval base south of Tokyo and would join exercises with South Korea from Sunday to the following Wednesday, U.S. officials in Seoul said.

"This exercise is defensive in nature," U.S. Forces Korea said in a statement. "While planned well before yesterday's unprovoked artillery attack, it demonstrates the strength of the ROK (South Korea)-U.S. alliance and our commitment to regional stability through deterrence."

North Korea said the South was driving the peninsula to the "brink of war" with "reckless military provocation" and by postponing humanitarian aid, the North's official KCNA news agency said. The dispatch did not refer to the planned military drills.

The government in Seoul came under pressure for the military's slow response to the provocation, echoing similar complaints made when a warship was sunk in March in the same area, killing 46 sailors.

Japan is close enough to be an aircraft carrier. The administration seems bent on making sure the sending of the carrier is meaningless to the Norks. "Nothing to worry about, we are just practicing something we are never going to do."

The demand for humanitarian aid after an unprovoked attach is a pretty good example of chutzpah on the part of the Norks.