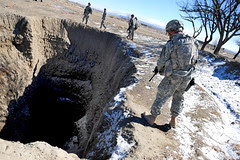 Surveillance first identified eight fighters readying their weapons for attack in a compound that was targetted by RAF Tornado with a 500lb satellite guided bomb.

The Paras were then ordered to fight through the village but met with fierce enemy resistance and roads laced with hidden IEDs (Improvised Explosive Device).

Lt Sam Whitlam, commanding 5 Platoon, B Company, 3 Para, decided to outflank the Taliban fighters by moving a troop of Mastiff armoured vehicles through fields free of IEDs.
By mid-afternoon a hole was punched in the first of four compound walls by engineers using an anti-tank mine.

The 27 ton, six-wheeled Mastiffs punched through the gap the infantry followed behind immediately coming under heavy fire from machine guns and rocket-propelled grenades..
L/Cpl Andrew Wiltshire, 25, one of the Paras in the advance described it like a scene from the wartime drama Band of Brothers. "The blokes were ducking down behind the Mastiffs with rounds coming in hitting the sides. We were trudging through fields trying to keep up with the vehicles with mud clogging our boots. You certainly got an idea what it was like for an infantryman to be following a tank while under fire in World War Two. Either you stay behind it or you get shot."

With the Mastiffs ahead of him Lt Whitlam, 25, had to lead his men for 100 yard slog across an open field. As they got to a muddy patch in the middle a Taliban machine gun team opened up a short distance away to their left.

"It was a nightmare, we were wading through mud up to our knees while putting rounds down on the enemy position," he said.

Mortars dropped smoke grenades into the enemy bunker to "flush them out" and a few minutes later an American F15 jet screamed down making the first of three strafing runs landing cannon shells 50 yards from the soldiers.

"The rounds were literally snapping over our heads," said Lt Whitlam. "But we are Para Reg so we went forward and finished the job."

By 8pm, as darkness covered the picturesque landscape of irrigation ditches lined by trees, the soldiers had taken compounds that had been the enemy stronghold for months.

The retreating Taliban were kept under surveillance until two A-10 Warthogs showed up and destroyed what was left of the retreating forces. The A-10 is the ideal plane for that job in Afghanistan. I wished the Marines had a version of it.

While the Taliban in the rear brag about the situation in Afghanistan, it is unlikely that the ones in contact with NATO forces are doing any bragging.