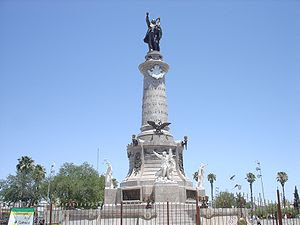 A notorious drug gang leader has been captured and has confessed to ordering most killings in the battle-scarred border city of Ciudad Juárez since August 2009, including the drive-by shootings of a United States consular employee and her husband, Mexico’s federal police said Sunday.

Arturo Gallegos Castrellón, 32, leader of the gang Los Aztecas, was arrested along with two other gang leaders in a Juárez neighborhood on Saturday, said Luis Cárdenas Palomino, chief of the regional security division of the federal police.

Mr. Cárdenas said Mr. Gallegos claimed to have ordered 80 percent of the killings in the last 15 months. “He is in charge of the whole organization of Los Aztecas in Ciudad Juárez,” Mr. Cárdenas told reporters at a news conference in Mexico City. “All the instructions for the murders committed in Ciudad Juárez pass through him.”

The arrest marked a public-relations victory for the Mexican government as it takes aim at the top leaders of Mexico’s brutal drug cartels, but it offered no guarantee to weary Juárez residents that the violence that has claimed more than 2,000 lives in the city this year would diminish.

Los Aztecas are a cross-border gang that carries out enforcement activities for the Juárez drug cartel, which has been fighting the Sinaloa cartel for control over the city, according to Mexican officials.

It is too bad Mexico does not have a death penalty for the cartels' executioners. It would probably reduce the numbers of killings in Mexico. There are very few recidivist among those given the death penalty.