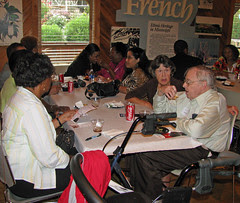 A popular theory of this year's midterm election holds that Democrats took a shellacking in part because big chunks of the party's core liberal base, discouraged at the path of the Obama administration, stayed home rather than show up to vote as they did in 2008.

It's an interesting narrative. It also doesn't appear to be entirely accurate.

While it's correct that some key parts of the Democratic coalition—young voters and African-Americans among them—didn't perform as they did in 2008, evidence emerging as the dust settles from this month's election suggests the bigger hole in the side of the Democratic ship came from moderates in the political center who didn't show up. (Those absences were in addition to the wave of independent swing voters also from the center who, exit polls showed, turned out but switched their votes to the Republicans.)

Seib suggest, correctly I think, that if the Democrats think their liberal base did not show up because of "compromises" with moderates then the party will turn sharply to the left. This appears to be to be what Pelosi et.al. think. If they do that, it will be a disaster for the Democrats and a good thing for the US as they will suffer an even bigger defeat in 2012.

If on the other hand they realize they have lost the center an turn back that way, they can be more competitive. That is really how they built their majorities in 2006 and 2008. They lost them because they did not govern from the center but grudgingly compromised to get their left wing agenda passed.