Not mentioned is media's own downplaying of coronavirus threat

The Lost Month: How a Failure to Test Blinded the U.S. to Covid-19

Aggressive screening might have helped contain the coronavirus in the United States. But technical flaws, regulatory hurdles and lapses in leadership let it spread undetected for weeks.

This from the paper that vehemently opposed the President's travel ban on people from China and implied that it was racist and xenophobic.   They should focus on China's coverup aided and abetted by the World Health Organization with claims that it was not spread by human to human contact.  If they had been honest Trump could have imposed his travel ban earlier and stopped the spread of the disease.

There is also the fact that the testing system inherited by the Trump administration was not up to the task of dealing with a pandemic of this size and required significant changes to become more robust.

I get the impression that the media has a two-tier approach to criticism of administrations.  They make excuses for Democrats and they are reflexively critical of Republicans.  This unfairness has seriously damaged their credibility.

Their attempt to avoid showing the President's press briefings has also benefited Fox News which has seen a massive increase in viewers.

Here are some examples of blatant anti-Trump bias by the media compiled by the Washington Free Beacon: 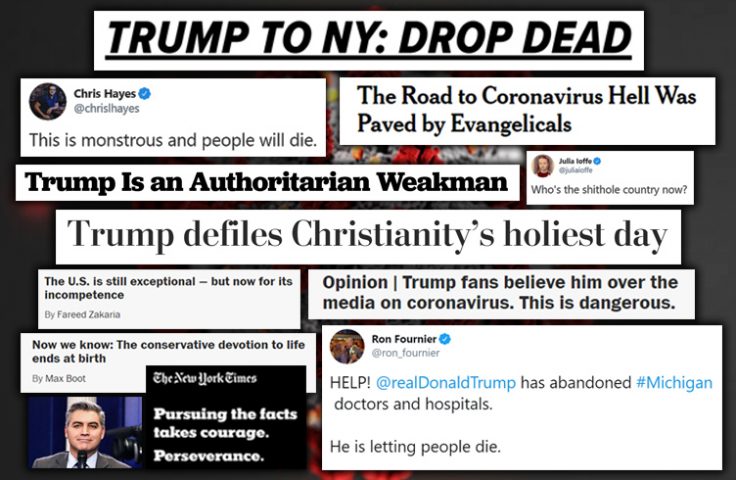