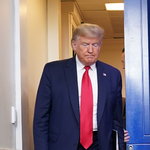 As the coronavirus rages, Americans’ views of President Trump have risen slightly to reach record highs, polls show. But he remains polarizing.

President Trump has achieved a 60 percent rating on his handling of the coronavirus crisis despite a hostile media that has been reflexively adversarial.  When he imposed a travel ban to stop the spread of the disease from China, the opposed it and called him xenophobic.  At every turn, they have found fault with his handling of the matter despite his reliance on professionals in handling this type of pandemic.  Now, because his press briefings are so popular with viewers, they are trying to censor them.  Few Presidents have had to deal with such a hostile and unfair media.  Trump is doing well despite their efforts.

The media is the one losing credibility.  Ever since Trump was elected they have embraced the Russian collusion hoax, the Ukraine impeachment effort, and many more false stories in an attempt to overthrow the 2016 election.


...
In any event, the media’s inane and badgering questions may well have helped Trump’s poll numbers. As soon as the media organizations saw that public wasn’t reacting in the way they had hoped, stations such as NBC and CNN began debating whether they should cover the pandemic press briefings at all. This is, of course, their prerogative. It also is the latest example of why so many Americans don’t trust them.
...

You can find more on the media's shameful attempt to censor the President here.
Media Polls Trump