The New York Times is operating in a pure propaganda mode, attempting to minimize the impact of the forthcoming (Dec. 9) report of the Department of Justice Inspector General, Michael Horowitz.  Sundance, of The Conservative Treehouse, calls his article on leaks from the report,  “highly structured obfuscation,” doing justice to the careful and artful misleading of readers. Keep in mind in understanding these leaks that principals named in an IG report are afforded an opportunity to comment on sections of the report that mention them prior to publication of the report. They don’t see the entire report, only those sections directly involving them. The IG is also able to write a rebuttal to those comments.
This means that nobody leaking is likely to have seen the full report, and thus the leakers do not grasp the entire context of the portions they have been given to review.  But that doesn’t stop the Times from headlining this ridiculous claim:

The FBI never tried to place informants inside the Trump campaign. They only ran informants to solicit information from people who worked for the campaign. Is it just me, or does this seem like a distinction without a difference. https://www.nytimes.com/2019/11/27/us/politics/fbi-trump-campaign-inspector-general.html?campaign_id=60&instance_id=0&segment_id=19143&user_id=7610682d4595b1a20773c0a31587b534&regi_id=58569598ing-news …

The F.B.I. never tried to place undercover agents or informants inside the Trump campaign, a highly anticipated inspector general’s report is expected to find.
nytimes.com

4,227 people are talking about this

He wasn't a spy.... he was hired by the FBI to secretly engage in conversations under false pretenses and then report back whatever he learned in those conversations.

But he wasn't a spy.

For over a year @realDonaldTrump told us he was spied on.

The “Elite” laughed at him.

Now we know is was all true and even have the codename of the Operation: #CrossfireHurricane.

But the @nytimes and its coconspirators still lie to America: 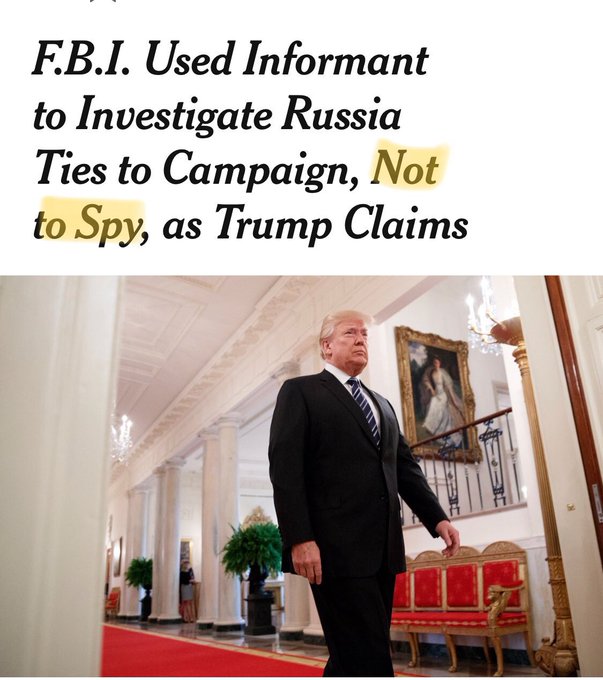 396 people are talking about this

The deception in the NY Times story is too big to ignore.  They are trying to deceive the voters into thinking that Trump was wrong about the spying on his campaign.
2016 Election FBI Media Trump