Benjamin Netanyahu has claimed that Israel had identified a “secret atomic warehouse” in Tehran, containing nuclear equipment and radioactive material.

Israel’s prime minister called for new sanctions against Iran and accused European leaders of “appeasement” for opposing them.

In a speech to the UN general assembly on Thursday, Netanyahu said he was revealing the existence of the “atomic warehouse” for the first time in public.

As he has in past presentations, Netanyahu brought visual aids to illustrate his claims.

Netanyahu described the facility as a “secret atomic warehouse for storing massive amounts of equipment and materiel from Iran’s secret nuclear weapons programme”, but gave no further details, other than to allege that government officials had spread 15kg of the radioactive material around the streets of Tehran in an attempt to dispose of it. He said a nearby rug-cleaning business should check its wares for radioactivity.
...

In a somewhat unrelated event, Iran was caught photoshopping a picture of Israeli soldiers in a propaganda story about brave Iranian troops.  They even cut out a woman Israeli fighter who was in the original photo.  With this latest revelation and teh Israeli operation stealing material from the Iranian nuclear program, I suspect the Revolutionary Guard is getting pretty antsy about where Israelis are getting all this information. 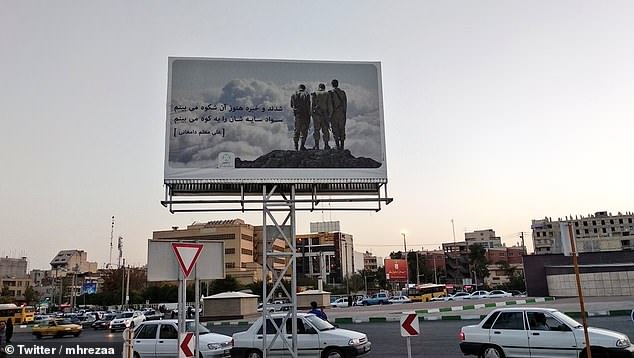 The billboard was put up in a square in central Shiraz to mark the 1980-1988 war between Iran and Iraq last week.