At one point during the event, Biden lapsed into the hesitant speech which has come to be normal for him. He said, “…Stop. Stop the cold war future that we’re talking about. We’re talking about a co..a peaceful cold war. What are we talking about?”
Please watch the brief clip below and focus on Obama’s face as Sleepy Joe struggles through a sentence. His expression says it all.
Although Democrats refuse to acknowledge the decline in Biden’s cognitive ability publicly, Fox News‘ media reporter, Joe Concha, appeared on “Fox & Friends” and said that “a lot of Democrats will tell you, at least privately, that he does not have the mental acuity that he even had a couple of years ago and this is a candidate that simply would not able to withstand the type of press conferences that the current president has, as far as them going on for an hour, an hour and a half, taking questions with multiple outlets with no ground rules attached.”
Still, Democrats continue to prop him up and as far as the polls go, Biden is way ahead of President Trump, just as Hillary Clinton was throughout much of the 2016 election season.
Anyway, at the end of the event, the former president said to Biden, “Love you, Joe.”
To which Biden replied, “Love you too, pal.”
Watch the clip. 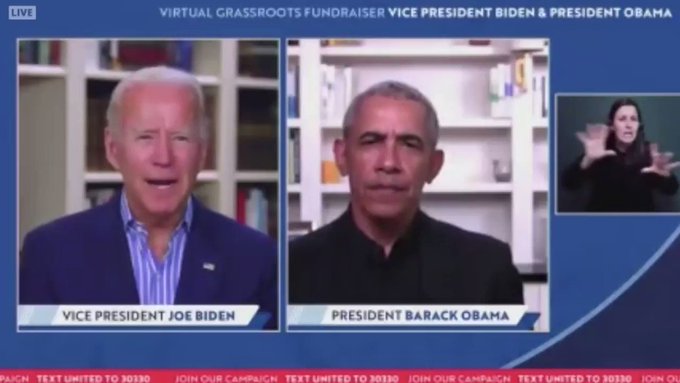 the_left_turnedme_right@gonlozano
And he is going to debate Trump.......

28 people are talking about this

How much longer can Democrats extend the charade that Biden is a capable candidate, much less a capable President?
Biden Democrats Obama