Dan Crenshaw challenges the premise behind the impeachment attempt

Finally! A political figure, rising star Rep. Dan Crenshaw of Texas, has challenged the false premise that there was anything wrong with President Trump asking for Ukrainian help in an investigation of corruption in the 2016 election undertaken by Joe Biden. Just because it would potentially help discredit a potential political opponent is no reason to override the public benefit from investigating corruption.
For some reason, no other national politician has bothered making this point. Crenshaw did so yesterday on CNN, and faced intense opposition from CNN’s Chris Cuomo:

He argues that an investigation into Biden and his son is within public interest and within his scope to ask Ukraine to look into it. 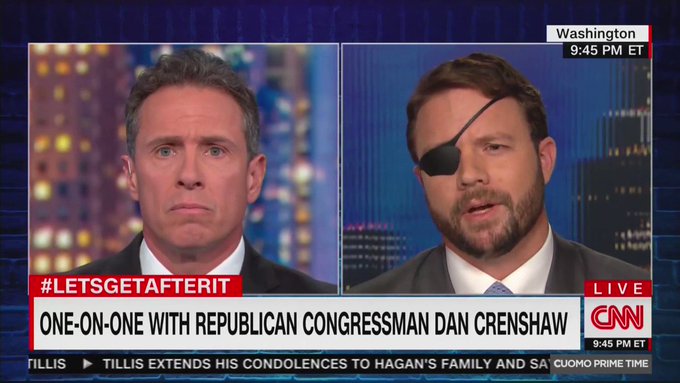 284 people are talking about this


I prefer to look through the other end of the telescope and express the question this way:
Does becoming a potential political opponent of the sitting president shield a politician from investigation of his or her political corruption, exposure of which could harm his/her electoral prospects?
...

Crenshaw shows common sense.  It is in the interest of the US for the President to ask others to cooperate in an investigation of corruption regardless of who is being investigated.  Indeed, it makes more sense to investigate corruption by a public official running for high office.  Biden should not get a pass because he is running for the Democrat nomination.  The whole premise of Schiff and the Democrats is ludicrous.
corruption Dan Crenshaw impeachment Ukraine