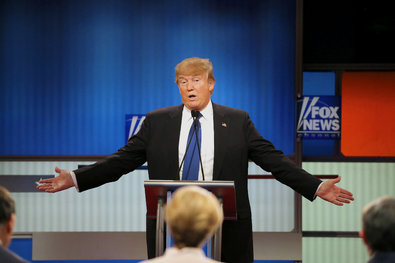 Donald J. Trump at a Republican presidential debate in March in Detroit. Mr. Trump spent hours with his debate team the past two Sundays, but he said, “I believe you can prep too much for those things.”
Mrs. Clinton’s team is gathering insights into Mr. Trump’s personality to pinpoint weaknesses, but he prefers a freewheeling approach to avoid sounding “scripted or phony.”

That strategy did not work out so well for Sen. Rubio in the GOP debates.  She will be playing in his sandbox and it is not likely to work.   She would be better served to stick to the issues and claim she is the serious candidate in the race.
Hillary Clinton Trump