Donald Trump Embraces Wider Use of Stop-and-Frisk by Police 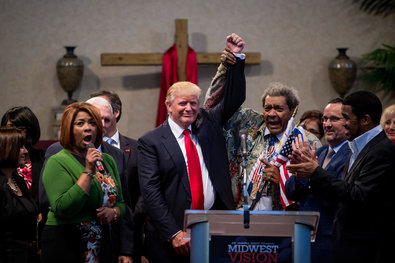 Donald J. Trump was introduced by the ex-promoter Don King on Wednesday before a town hall-style meeting at a church in Cleveland Heights, Ohio.
Mr. Trump’s endorsement of the aggressive crime-fighting tactic, whose legality has been challenged, collides with his recent courtship of African-American voters.

The premise of the story could not be more wrong.  Trump appeal to blacks is to make their lives safer and to stop crime in their neighborhood.  The Black Lives Matter movement is an anti-law enforcement movement that has led to the increase of crime in black neighborhoods and more black on black killings.  At its heart, black Lives Matter is against the rule of law and the people who will suffer the most or the poor blacks stuck in the neighborhood with the crooks.

The last two riots were after a black cop killed a black man with a gun who did not drop his gun when ordered to do so.  It cannot be said that the police killing was racial motivated.  In a sane world, people would be saying that the deceased wasn't smart enough to save his own life by dropping his weapon.  Instead, we get a tantrum of property destruction and more crime.  This is not an intelligent response, and more people need to say so rather than pretending to be part of a victim class.

It should be clear that the victims of this breakdown of law and order are black citizens who have to live with these criminals.  Trump seems to be the only candidate who is willing to do something to protect the law abiding citizens.