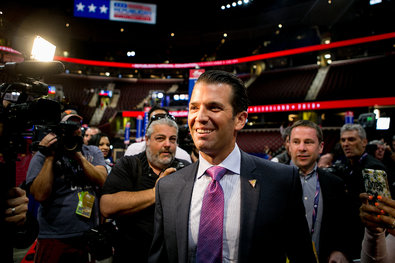 I think the liberal reaction to this analogy demonstrates they are having a difficult time dealing with the logic of the argument, that they cannot assume there will be no ISIL operatives in the mass of refugees coming in.  One liberal writer went so far as to compare DJ Jr. to the Nazis.  That is more evidence of panic than logic.

While we are on the subject of Syrian refugees, how can it be that so few Christians are being brought in  even though the administration has admitted that they are victims of genocide in Syria?  It is hard to reconcile the Obama-Clinton policy with the facts on the ground when they are bringing in so few people who have been targeted for genocide.  And the chances that any Christian refugees would be Islamic terrorist is virtually nil.  They would be the safest of Skittles.

BTW, the State Department concedes that ISIL is trying very hard to infiltrate the refugee population.  So the poison Skittle theory has some validity.
Syria Trump