A picture that still moves us

Memorial Day. The unofficial kickoff to summer. Barbecues sizzling. Lawn sprinklers hissing. Local marching bands tooting out Sousa. Red, white, and blue bunting hanging from the porch railings, and on TV, someone begins a recitation of Lt. Col. John McCrae’s classic poem: In Flanders field, the poppies blow/Between the crosses row on row …
In the run-up to every Memorial Day weekend, for the past several years, a certain photo takes top spot in those most circulated among my fellow military and veteran wives. On blogs, on social media sites, it is shared and “liked” over and over. Taken by the photographer Todd Heisler from his2005 award-winning series for The Rocky Mountain News, “Jim Comes Home”  — which documents the return and burial of Second Lt. Jim Cathey of the Marines, who lost his life in Iraq — the photo shows his pregnant widow, Katherine, lying on an air mattress in front of his coffin. She’s staring at her laptop, listening to songs that remind her of Jim. Her expression is vacant, her grief almost palpable. 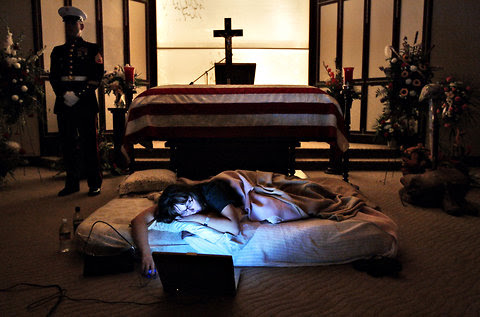 Todd Heisler/The Rocky Mountain News, via Associated PressThe night before the burial of her husband, Katherine Cathey refused to leave the coffin, asking to sleep next to his body for the last time. The Marines made a bed for her.
It is the one and only photo that makes me cry each time I see it. What brings the tears to my eyes is not just the bereaved young woman, but the Marine who stands behind her. In an earlier photo in the series, we see him building her a little nest of blankets on the air mattress. Sweet Lord, I cry just typing the words, the matter-of-fact tenderness is so overwhelming. So soldierly. But in this photo — the one that lives on and on online — he merely stands next to the coffin, watching over her. It is impossible to be unmoved by the juxtaposition of the eternal stone-faced warrior and the disheveled modern military wife-turned-widow, him rigid in his dress uniform, her on the floor in her blanket nest, wearing glasses and a baggy T-shirt, him nearly concealed by shadow while the pale blue light from the computer screen illuminates her like God’s own grace.

The story in the Rocky Mountain News was done by a friend of my son.  It was an outstanding tribute to those related to the fallen to see that they get proper notification and assistance in dealing with their grief.  It is a very powerful piece as this picture can attest.  It is another reason why I have such high regard for the Marine Corps and those who look over us.

You can find the prize winning story here under the second picture which also won an award.  It will also move you to tears.