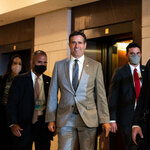 For weeks, the director of national intelligence has taken over a job usually done by an intelligence officer.

I can understand Trump's distrust of intelligence professionals since so many of them were participating in the coup attempt with the false narrative about Russian collusion.  It should take some time for the agencies to regain credibility.  It was one of the more disgraceful periods by a government agency in history.  I think John Brennan was largely responsible for it.  His false assertion that Trump was a "Russian asset" disgraced the whole operation.