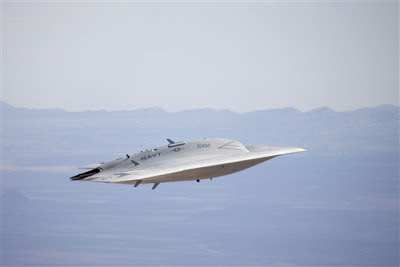 
The U.S. Navy’s new bat-winged experimental drone has been delivered to an aircraft carrier deck to undergo handling tests aboard the ship.

The Navy said that sailors aboard the aircraft carrier Harry S. Truman took delivery of the drone on Monday from Naval Air Station Patuxent River in Maryland, where it had been undergoing tests.

Truman is the first aircraft carrier to host test operations for an unmanned aircraft.

The drone, named the X-47B, is designed to perform one of aviation's most difficult maneuvers: land on the deck of an aircraft carrier. What's even more remarkable is that it will do that not only without a pilot in the cockpit, but without a pilot at all.

With the drone's ability to be flown autonomously by onboard computer, the X-47B marks a paradigm shift in warfare.

Currently, combat drones are controlled remotely by a human pilot. The X-47B could carry out a combat mission controlled entirely by a computer. A human pilot designs a flight path and sends it on its way and a computer program guides it from a ship to target and back.

The X-47B is designed to fly farther and stay in the air longer than existing aircraft because it does not depend on a human pilot's endurance. Navy fighter pilots may fly missions that last up to 10 hours. Current drones can fly for three times that long.
...

The plane looks bigger when you see it on a carrier deck.  I previously posted some of its test flight video showing both take offs and landings using regular runways.  I think this plane may be one of the most interesting ones in the US inventory in coming years.  The first actually carrier take offs and landings are scheduled for 2013.
X-47B