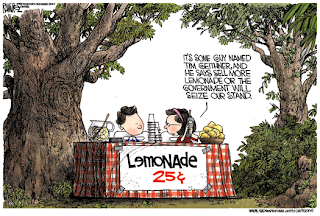 Michael Ramirez looks at the Geithner plan. I am always please to see more mainstream acceptance of my description of Democrat policy and this Investor's Business Daily editorial is captioned Control Freaks.

Geithner said Thursday that President Obama's administration needs to impose "not modest repairs at the margin, but new rules of the game" for America's banks, finance companies, insurers and hedge funds.

The only problem is, the old rules of the game were set by the very people in Congress who will set the new ones. This means the new rules likely won't be much of an improvement — if any.

The irony of this, of course, was pointed out by political scientist Michael Barone, who notes the bank bailout plan unveiled by Geithner earlier this week actually relies heavily on mostly unregulated companies to bail out regulated ones.

Now, Geithner wants control of even those unregulated companies, though they're guilty of nothing other than being successful.

There is something weird about this administration. They want to control other peoples business without taking responsibility for profits and losses. I have noted before they are actually worse than socialist, because the socialist is at least responsible for the mess he makes. These Democrats want to command the economy while pushing the risks on others.
Democrats