Are they the ones supplying fossil fuel?

The conspiracy theorists who think the Earth is HOLLOW: Growing community believe superior 'alien' humans, Vikings and Nazis live in paradise in the centre 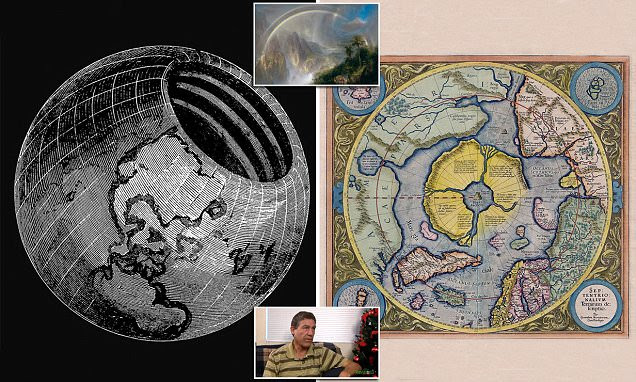 A group of conspiracy theorists believe the Earth is hollow - and that superior 'alien' humans, Vikings and Nazis live inside. Instead of thinking that the world is flat, they are convinced that it actually contains a paradise at its core that resembles the Garden of Eden (illustrated inset top). The 'hollow-Earthers' even believe UFOs are sent from the globe's interior by 'guardians of the planet' to spy on the human race and avert a potential nuclear war. Author Rodney Cluff (inset bottom) is spearheading the bizarre movement, which he claims has thousands of followers after a boom in numbers. He is so confident in his theory that he organised a voyage to the hollow earth in 2007 via an 'opening' in the North Pole. Although the £15,000-per-head expedition was cancelled, Cluff is convinced that an inner paradise with its own solar system exists. The conspiracy theorists also believe there is another portal in the poles and one in the Himalayas - leading to a land that is home to immortal escaped Nazis from World War II and the lost Viking colonies. Cluff told the Sun: 'I don't know how the flat-Earthers can be so confused. They are obviously wrong. The world is not flat – it's hollow.'

I am positive they are as mistaken as the flat-earthers. But there are enough people who believe a lot of things that are not so that it is not that surprising that they find each other.