The wisdom of the rainy day fund in Texas

Some States See Budgets at Risk as Oil Price Falls 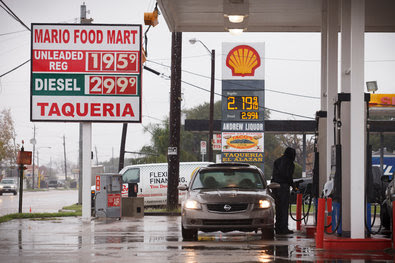 Gas prices have fallen below $2 a gallon in Houston. The Texas economy is more diversified than in the past, but a gloomy forecast includes a warning about a drop in the state’s home values.
A study projected that job losses tied to the decline in energy costs would be largest in Wyoming, Oklahoma and North Dakota.

Texas has a diversified economy and has also experienced the ups and downs of the oil market for decades.  While Democrats wanted to spend the surplus accumulating in Texas, Gov. Perry and the Republicans in the legislature refused to do so.  They will probably loosen the purse strings a little in 2015 to improve roads that have seen heavy use because of the oil boom.  The local governments near the boom have been much more conservative during this one too.

The education lobby in Texas is pushing for more spending by using the courts, but I think the lower court ruling will not survive a hearing with the Texas Supreme Court.  Texas schools are out performing most in the nation even though their budget growth was restrained during the recession.  That should be a lesson for the future.  If funding was the answer then Washing D.C. would have a decent system which it does not.
energy Texas