I don't see a split over law and order in GOP 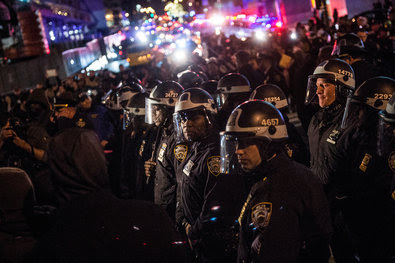 The police in Manhattan sought to keep order at a Dec. 3 protest over the death of a black man in custody. Such protests angered Republican supporters of the police.
While some Republicans are seeking to overhaul the criminal justice system and reach out to minority voters, others are angered by protests and violence against the police.

The anger is really over the big lies used to fuel the protests.  The "hands up, don't shoot" lie has been used to stir emotions by some Alinsky like activist on the left.  Many in the media have helped to push this false narrative.  But I think Republicans want an effective criminal justice system.  I don't think there is agreement on the right that Al Sharpton is not a credible leader.  He has a history of being involved in  false racial narratives for his own political purposes.  Any movement he is associated with is suspect.
Crime Republicans