Many see 'immigration reform' as not addressing the real problem

After Obama’s Immigration Action, a Blast of Energy for the Tea Party 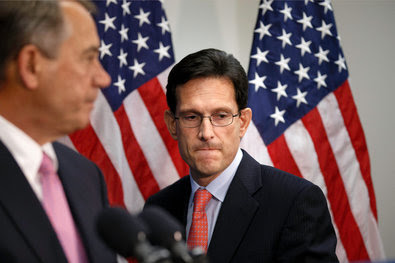 Eric Cantor of Virginia, who lost a Republican primary to a Tea Party rival, in June with Speaker John A. Boehner.
Federal spending reductions and the battle against the Affordable Care Act are taking a back seat to immigration, to the point that party members are calling for Sarah Palin to oppose John McCain, who supports immigration overhaul.

What liberals and Democrats see as immigration reform reflects a very different problem than what other sees.  Democrats talk about the inconvenience of living in the shadows while many Americans see the problem as how do you stop the illegal migration and get control of the border.

They see the problem of "living in the shadows" as one of the illegal's own making by coming here illegally to begin with and they believe that taking them out of the shadows will only encourage more illegal immigration.  Obama acts like that is what he wants.

He gives the impression that he and other liberals see these people more as undocumented Democrats than people who jumped the queue ahead of more qualified immigrants who play by the rules.  The Democrats have never really addressed the problem that killed the Bush administrations attempt at "immigration reform."  With the way Obama has led DHS there is no trust that he would actually enforce a tougher border if the law was changed to make that possible.  To them, this executive order is just more evidence that he will ignore the law and do what he wants.
immigration. law enforcement