This may look like a return of popular protest in Iran, but in truth those demonstrations haven’t entirely stopped. Until recently, though, they mostly stayed out of Tehran. Over the last several days, demonstrations at retailers grew into a massive rally that closed down the city’s Grand Bazaar and then marched on Iran’s parliament:

Protesters angered by Iran’s cratering economy confronted police officers in front of parliament on Monday, with security forces firing tear gas at them, according to online videos, the first such confrontation after similar demonstrations rocked the country at the start of the year.

The unplanned demonstration came a day after protests forced two major shopping centers for mobile phones and electronics to close in Tehran and after demonstrators earlier closed its Grand Bazaar. …

It wasn’t immediately clear who led the protests. Iran’s semi-official news agencies Fars, ISNA and Tasnim described the protests at the Grand Bazaar as erupting after the Iranian rial dropped to 90,000 to the dollar on the country’s black market, despite government attempts to control the currency rate.

Videos posted to social media showed protesters at the bazaar heckling shopkeepers who refused to close, shouting in Farsi: “Coward!”

A short time later, about 2 kilometers (1.25 miles) from the Grand Bazaar, videos shared by Iranians on social media appeared to show a crowd confronting police at parliament. The videos show tear gas in the air and protesters screaming, “They attacked us with tear gas!” Another man is heard shouting: “Come back!”

...
Update: This certainly doesn’t sound like a hardliner effort:

MUST-WATCH: Crowds in Iran are chanting "Death to Palestine!" Not to Israel. Not to America. But to Palestine.

Hamas and Hezbollah and Palestinian Jihad can kiss their Iranian funding goodbye if the regime falls. https://twitter.com/jalilazizi13/status/1011216813944901633 … 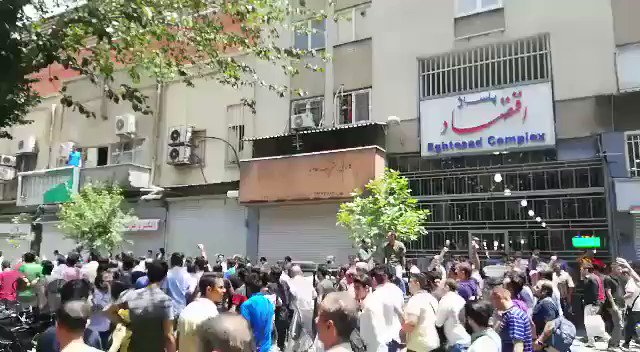 The Iranians are right to protest the Mullahocracy that has been imposed on them.  The Mullahs have failed in their responsibility to the people and have squandered the Obama windfall on their futile war with Israel and supporting a Syrian despot.  Trump is right to side with teh people instead of this odious regime.
Iran